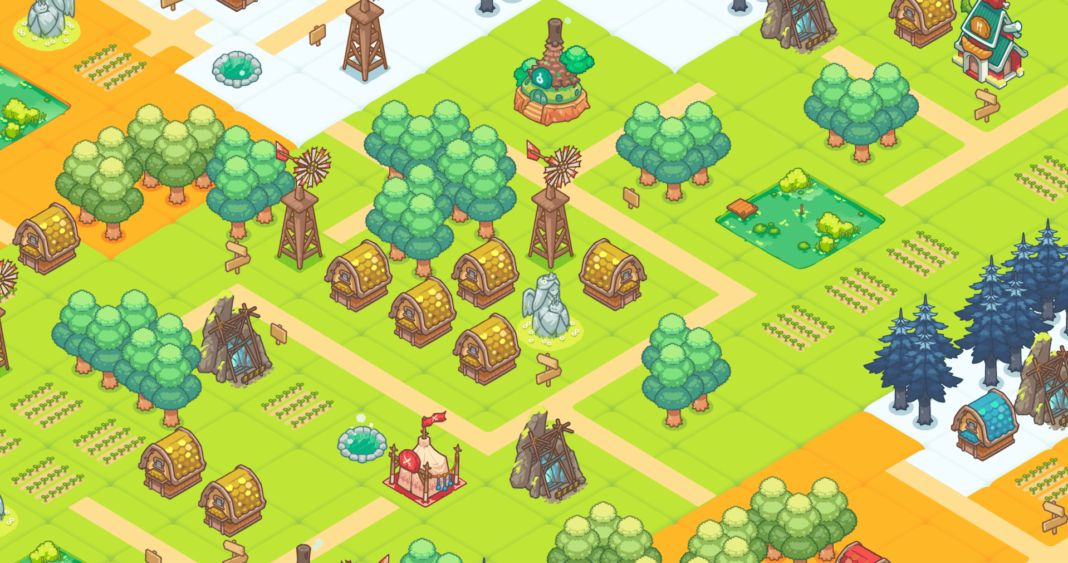 Axie Infinity land NFTs exist in the fantastical world of Lunacia, and this is a detailed guide dedicated to it. By the way, you may also be interested in learning how to earn money in Axie Infinity, and how much.

The land of Lunacia is divided up into plots of lands called Terra. These plots of land can be bought, sold, rented out, or developed by players as tokenized NFTs.

Anyone who owns land in Lunacia can upgrade it, customize it to host shops, use it to produce resources, host Chimera summoning beacons, and use it to house NPCs, or as an access point for dungeons.

Within Lunacia, independent developers, companies, and content creators will be able to build on top of it using clickable wormholes as launch pads for their content. Really, the Lunacia digital real estate offers limitless possibilities.

Details of the Land Plots within Lunacia

Within Axie Infinity, Lunacia is the metaverse. This Axie Infinity land is split into plots called Terras. A plot is represented by a 301×301 grid where each square represents a tokenized plot. A plot comprises 64 spaces that exist in an 8×8 grip.

Players can place Axies within the plots. They can also place other items within their plots, which they use to boost the stats of their Axies. In the future, it will be possible to assign 3 Axies to a plot of land. Besides that, land plots will be upgradable to hold more Axies by creating certain structures on them. All farmed resources will be the property of the plot owner. Within Axie Infinity, there are four types of plots which are: Savannah, Artic, Mystic, and Forest.

Axie Infinity plans to sell at least 25% of all land during the first land sale. After that, prices will rise by 25%. All land within Lunacia is owned by the Lunacia High Council. It will be used to incentivize content creators as well as host various world events.

Within Lunacia, the pink squares are public resource nodes as well as the spawn locations for chimeras. The pink lands will also play an important role in hosting world events and dungeons. Lunacia also features roads, which can speed up travel by 300% while rivers cannot be crossed by traveling Axies. When a road crosses water, it is presented as a bridge.

Participants can buy up to 100 chests of a given type at a time. All chests which are brought together will contain interconnected lands. Axie Infinity developers will make it a random process within the land type associated with a chest.

The first land sale on Axie Infinity took place on January 21, 2019. Roughly 14% of the total land supply has been sold thus far. You can purchase your Axie Infinity land on the official website.

With Axie Infinity, there are plots called special lands. These lands come with a higher chance of spawning rare Axies and are called Genesis lands. All resources collected in these types of lands are divided amongst the landowners. There are 220 Genesis plots within Axie Infinity. Today, 75 of them have been released.

Another special land within Lunacia is Luna’s Landing, and it is located at the center of the map. The plots would be used to host special events. Those who had collected a full set of items before May 22, 2019, were given 1 Luna‘s Landing plot.

On Lunacia, items come with four different types of rarity. These are:

The Common items are the least rare and they have the least strength. Further down the list, you find the Mystic items, which are the rarest and the most powerful. These items give the Axies major benefits and will be necessary to create certain structures in the future. The Rare are merely improved versions of the Common while the Epic items give users powerful bonuses. Within Lunacia, there are currently over 1999 different types of Land Items. These items can be used to enhance Axies.

Details of the Axie Infinity Land Gameplay within Lunacia

A major aspect of the gameplay within Lunacia is travel. This can take an Axie a few days or up to a week to get from Luna’s Landing to the edges of the map. It is the reason why lands classified as Forest and Savannah are less valuable than Mystic and Arctic lands. It is because it simply takes longer to get there.

Most events within Lunacia take place at the center of the map. Thus, it would make sense for players to want to be closer to the center. Besides that, every activity costs Axies energy, which would make it harder to teleport. By being close to the shortest route, it ensures that you have enough energy to do so. Additionally, being close to resource nodes ensures you never run out of energy.

The Lunacia gameplay can be broken down into three activities:

Chimeras are hostile creatures, which drop various resources, blueprints, and items that are needed to upgrade the land and Axies. Pink squares are the Chimera spawn locations as well as public resource nodes. As they fight and defeat the Chimera, players will find blueprints all over Lunacia.

Users can spend time customizing their plots by building structures and functionalities into them. Creating structures on land will cost time and resources. The bigger a structure, the more resources and time it will cost.

Players with a plot of land can use it to generate rare ingredients, house Axies, fish, produce resources, and more. Players can gather resources through activities such as mining at quarries, visiting farms, and chopping wood. Some of the resources can only be accessed when one of the 7 moons on Lunacia is shining. Thus, timing will be crucial to ensure you gather the right resources. It could also affect the rarity of resources. All resources gathered via adventures within Lunacia will be represented as ERC20 tokens.

The Lunacia metaverse comes with an SDK. This SDK features a map editor that players can use to create games and other experiences. Games can then be saved as a tradable NFT. Users can place the NFT on a plot and other players can click on it to enter the game inside. By doing so, the goal is to gradually decentralize the entire Axie Infinity Universe.